Our ongoing series on ETF investing may not be quite as thrilling as you manage to catch “Game of Thrones” in real time this season, but I hope we’re at least helping you dominate your own ETF empire. Currently, we’re about to take on Part II in this three-part battle among global equity ETFs:

BlackRock released the iShares MSCI ACWI ETF (ACWI) in 2008 to track the MSCI ACWI Index. While ACWI may sound like a mythical realm, it’s really just an acronym for “All Country World Index”. It includes all the developed companies in the MSCI World Index, plus all the large- and mid-cap companies included in the MSCI Emerging Markets Index.

The MSCI ACWI Index allocates about 12% to emerging markets companies, reducing its developed stock market exposure to around 88% relative to the MSCI World Index, which invests only in developed markets.

Since ACWI is a U.S.-listed ETF, it also avoids the 15% U.S. withholding tax on foreign dividends when held in a tax-deferred account such as an RRSP, LIRA, RRIF, or LIF. I’ve included ACWI’s estimated foreign withholding tax impact across various account types in a chart near the end of this piece.

XAW tracks the performance of the MSCI ACWI ex Canada IMI Index, which allocates about 56% to U.S. equities, 32% to international equities and 12% to emerging markets equities.

This index is similar to the MSCI ACWI Index, with two notable differences:

1. The “ex Canada” in the name indicates that Canadian stocks are excluded from the index, so XAW excludes Canadian companies, while ACWI includes them. This exclusion is a nice feature for Canadian investors who may already have an extreme home bias to domestic stocks.

XAW uses a “fund-of-funds”, or “wrap” structure, to gain exposure to the index’s asset classes – but with some interesting nuances.
First, for U.S. equity exposure, iShares picked not just one, but four of its existing U.S.-listed ETFs: IVV, IJH, IJR, and ITOT. Since none of their existing ETFs precisely track the MSCI USA IMI Index, the interesting combination is iShares’ attempt to mimic the index’s specific returns anyway.

In addition, iShares claims their proprietary Aladdin equity risk model possesses special powers to minimize tracking error between the combined performance of the four ETFs and the MSCI USA IMI Index. (Trivia: “Aladdin” also is an acronym, standing for “Asset, Liability, Debt and Derivative Investment Network.” Don’t worry; this won’t be on the test.)

The verdict is out on whether this is just wishful thinking, or if they should have simply held the iShares Core S&P Total U.S. Stock Market ETF (ITOT). The argument against holding only ITOT is that it includes a tiny allocation to micro-cap stocks, while the MSCI USA IMI Index only includes large-, mid- and small-cap stocks.

Practically speaking, the returns of both indices have been nearly identical over the past 10 years, so investors would have likely been comfortable if XAW had held just ITOT from the onset. 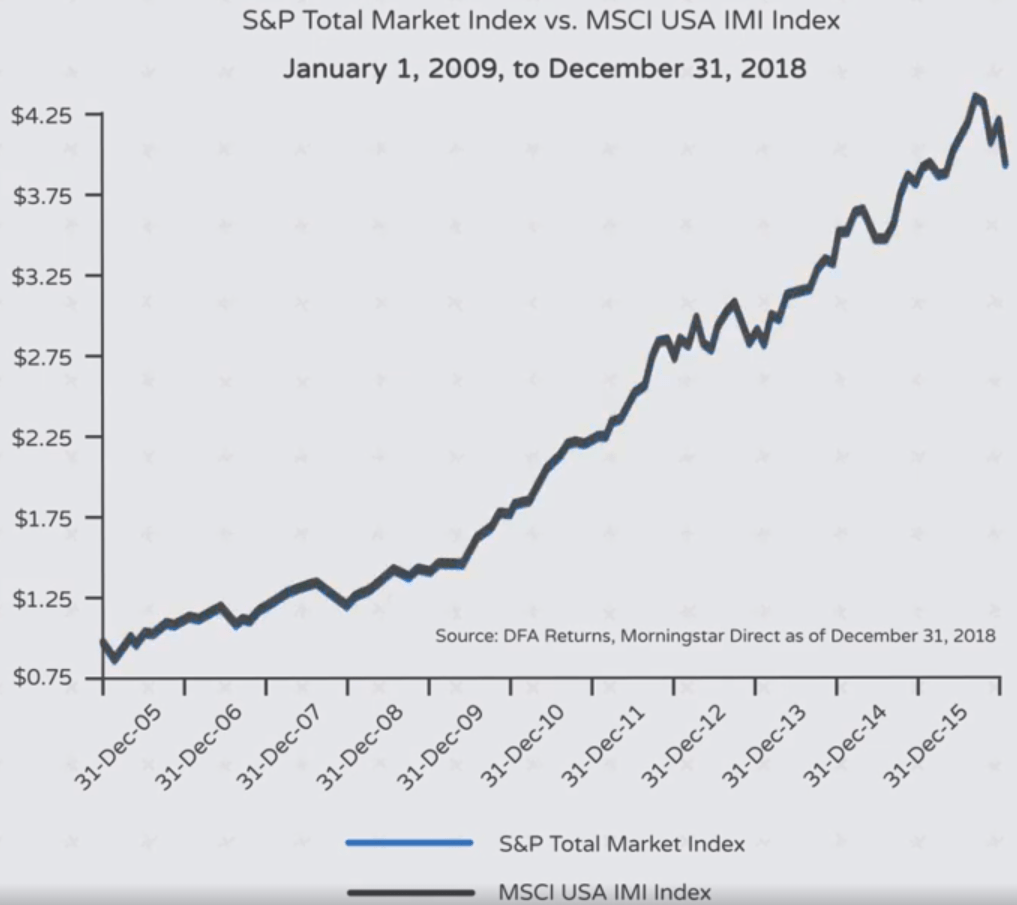 For international equity exposure, iShares has opted to hold the iShares Core MSCI EAFE IMI Index ETF (XEF). As the ETF is Canadian-listed and holds the underlying international stocks directly, this choice has resulted in greater tax efficiency across all account types, relative to holding its US-listed counterpart, the iShares Core MSCI EAFE ETF (IEFA). Holding IEFA would have resulted in an additional layer of unrecoverable foreign withholding taxes (Note: If XAW had chosen to hold IEFA, the foreign withholding tax impact to the investor would differ in tax-deferred accounts, relative to the individual investor holding IEFA directly – confusing, right?).

For emerging markets exposure, the most tax-efficient fund would have been a Canadian-listed ETF that holds the underlying emerging markets stocks directly. This would have mitigated the cost drag from foreign withholding taxes. Too bad there are currently no Canadian-listed ETFs available that follow the MSCI Emerging Markets IMI Index, and hold the underlying stocks directly. To make do, iShares chose to hold the U.S.-listed iShares Core MSCI Emerging Markets ETF (IEMG).

War of the Worlds: XAW vs. ACWI

Although ACWI and XAW are imperfect substitutes for one another, I’ve compared their foreign withholding tax drag across various accounts in this chart. XAW has been more tax-efficient than ACWI across all accounts except tax-deferred accounts such as RRSPs, LIRAs, RRIFs, and LIFs.

From a product cost standpoint, holding XAW (instead of purchasing all of its underlying ETF holdings), will cost you about 0.22%, or roughly twice the weighted-average cost of the underlying ETFs. However, most investors with modest-sized portfolios and limited time to spend managing them would likely agree: The simplicity of XAW seems worth the additional cost.

The World Is Your ETF Oyster

I estimate the switch-out could produce around 0.39% in annual cost- and tax-savings. On a $10,000 global equity allocation, you’d only save around $39, so investors with smaller portfolios may be better off just holding XAW. But on a $100,000 allocation, estimated annual savings increases to $390. That’s probably money worth keeping in your pocket by breaking up your XAW allocation.

As purchasing U.S.-listed ETFs requires U.S. dollars, please refer to my Norbert’s gambit video tutorials, which will show you how to cost-effectively convert your Canadian dollars to U.S. dollars at various Canadian discount brokerages. If you’re also interested in comparing the MER and foreign withholding tax differences between various broad-market ETFs, please try out my Foreign Withholding Tax Calculator, available as a free download in the Calculators section of the Canadian Portfolio Manager blog.

Next up, in Part III of our “Under the Hood: Global Equity ETFs” series, we’ll check out two global equity ETFs from Vanguard. Stick around, and I’ll release that gripping episode soon.