So, what did you think of the Game of Thrones grand finale??? I don’t want to spoil it for both of you who haven’t watched it yet, so I won’t share my own thoughts here. DM me if you’re interested.

In the meantime, let’s embark on our own epic wrap on our “Under the Hood Series” about Global Equity ETFs. In today’s final quest for the global equity crown, we’ll conclude with two Vanguard ETFs that track FTSE Russell indices.

VT vs. ACWI: You’ve Got the Whole World in Your ETF

The Vanguard Total World Stock ETF (VT) is the complete package. It currently includes about 8,000 large-, mid-, and small-cap stocks in emerging and developed markets (including Canada). The number of holdings is set to increase further, when its underlying index provider, FTSE Russell, begins adding China A shares to its global equity index line-up this year.

Out of all the global equity ETFs we’ve reviewed, VT is most comparable to the iShares MSCI ACWI ETF (ACWI). The MSCI ACWI Index (which ACWI tracks) allocates about 88% to companies in developed markets and 12% to emerging markets companies, while the FTSE Global All Cap Index (which VT follows) has a similar breakdown – at least it does after the region weights have been adjusted for index country classification differences for Korean and Polish companies. 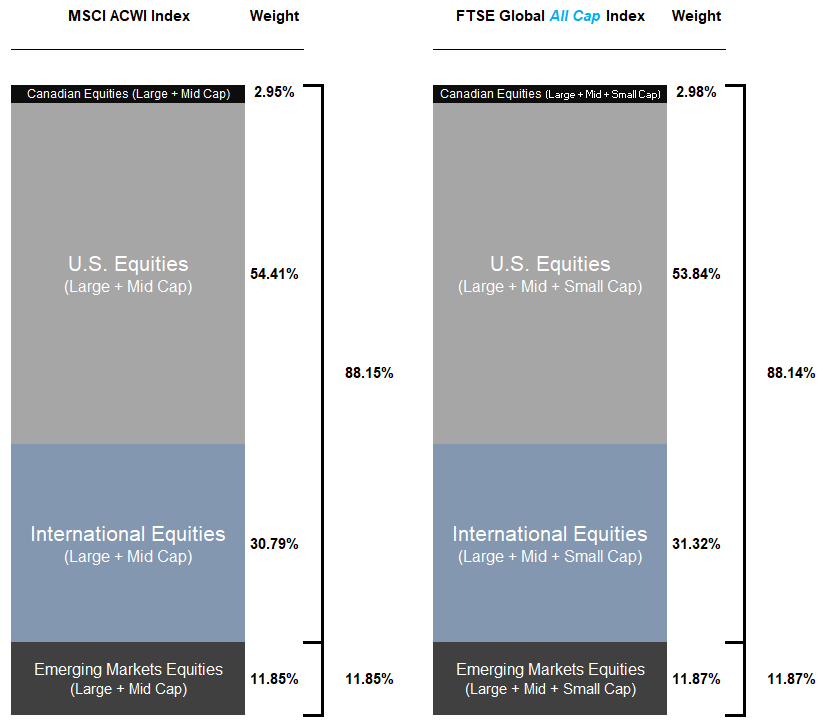 The main differences between the two ETFs are:

Both VT and ACWI are U.S.-listed global equity ETFs, so they have similar foreign withholding tax implications across all account types. As VT is cheaper and more diversified than ACWI, most investors would likely prefer investing in the former.

VXC vs. XAW: A Day Late and a Tax Dollar Short

Last up, the Vanguard FTSE Global All Cap ex Canada Index ETF (VXC). VXC is a direct competitor to the iShares Core MSCI All Country World ex Canada Index ETF (XAW). As the “ex Canada” in their names suggest, both VXC and XAW exclude Canadian companies. VXC has a cost of 0.27% per year, while XAW comes in slightly lower, at around 0.22%.

As “All Cap” and “IMI” are included in the names of the FTSE Russell and MSCI indexes tracked by VXC and XAW, we know both funds include large-, mid- and small-cap companies. After the region weights have been adjusted for index country classification differences for Korean and Polish companies, we find that both indices have nearly identical weights allocated to U.S., international, and emerging markets companies.

VXC uses a fund-of-funds, or wrap structure, to gain exposure to around 9,500 stocks from developed and emerging markets. This is similar to XAW, which tracks around 8,400 stocks.

For U.S. stocks, Vanguard has chosen to hold two of its existing ETFs in order to mimic the returns of the FTSE USA All Cap Index:

Vanguard could have opted for a single U.S. equity fund, the Vanguard Total Stock Market ETF (VTI), which follows the CRSP US Total Market Index. However, because VTI’s underlying index includes a small allocation to micro cap stocks (while the FTSE USA All Cap Index does not), Vanguard felt the two-ETF approach would result in less tracking error relative to the target index.

The following year, Vanguard launched the more tax-efficient Vanguard FTSE Developed All Cap ex North America Index ETF (VIU). But international stocks had already increased by over 10% during that time, which meant replacing VGK and VPL with VIU would have realized large capital gains for their existing unitholders.

Challenge #2: The Absence of Israel

The second issue related to VXC holding VGK and VPL (instead of VIU) is that Israeli companies end up being excluded. Consider this:

By process of elimination, this leaves Israel’s stock market out in the cold when VIU is replaced with the VGK/VPL combo.

To recap, let’s just say VXC has a number of factors working against it. All else being equal, investors may want to consider XAW instead.

That said, is “all else” ever truly equal? Maybe we Game of Thrones fans have achieved closure, but in the battle for your best-spent investment dollars, victory is rarely final. So, now that we’ve got all of those individual ETFs out of our system, it’s time for a new kind of contender. Coming up, I’ll be rolling out The Ultimate Guide to the Vanguard Asset Allocation ETFs.