We’ve now covered just about everything you need to know about investing in total U.S. stock market ETFs, including a general comparison among four solid choices, as well as a discussion about the foreign withholding taxes involved.

“If the product costs and foreign withholdings taxes on dividends are reduced by holding U.S.-listed U.S. equity ETFs in an RRSP, why not just buy VTI or ITOT, instead of VUN or XUU?”

And if there were no costs to convert your loonies to U.S. dollars (and back again), you’d be on the right track. But we haven’t yet touched on some of the biggest costs facing Canadian investors purchasing U.S.-listed ETFs. These are the high currency conversion fees levied by their brokerage.

For example, let’s compare a $10,000 Canadian dollar investment in VTI and VUN within an RRSP. We’ll start both investments on January 1, 2014, which was the first full calendar year after VUN launched, and run through the most recent year-end. Across this period, we’d find that VTI did in fact grow at a faster rate than VUN, due to its lower product costs and the elimination of the 15% withholding tax on U.S. dividends received in the RRSP. 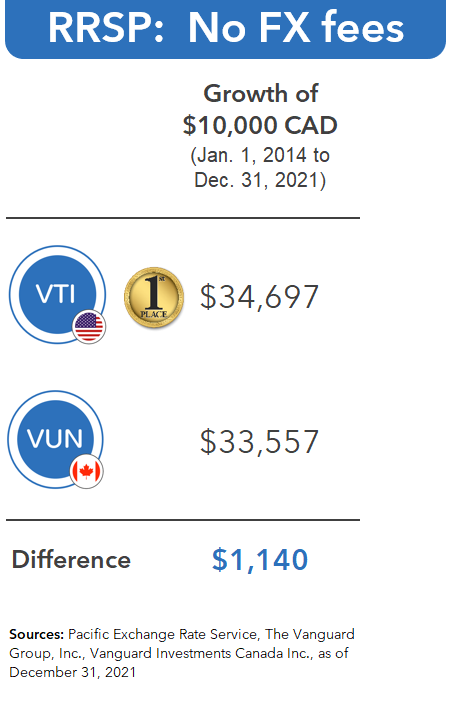 To illustrate: Let’s assume a brokerage can convert Canadian dollars to U.S. dollars at a favourable corporate rate of 1.25. This means that 1.25 Canadian dollars are truly worth around 1 U.S. dollar. Now that’s what it costs them. But to earn a 2% currency conversion fee from their clients, they would offer you a higher retail exchange rate of around 1.27551. This is calculated as the 1.25 corporate rate divided by (1 – their 2% currency conversion fee).

See how easy it is for these currency conversion fees to go unnoticed?

If that’s not frustrating enough, you take another hit on the way back, when you sell your VTI shares and convert your U.S. dollars back to loonies. In our 2% currency conversion fee scenario, any benefits from holding VTI instead of VUN in an RRSP would end up being significantly reduced during the measurement period.

The message is clear: The fee and tax advantages of holding U.S.-listed ETFs in an RRSP don’t count for much if your broker gouges you on currency conversion fees in the process. 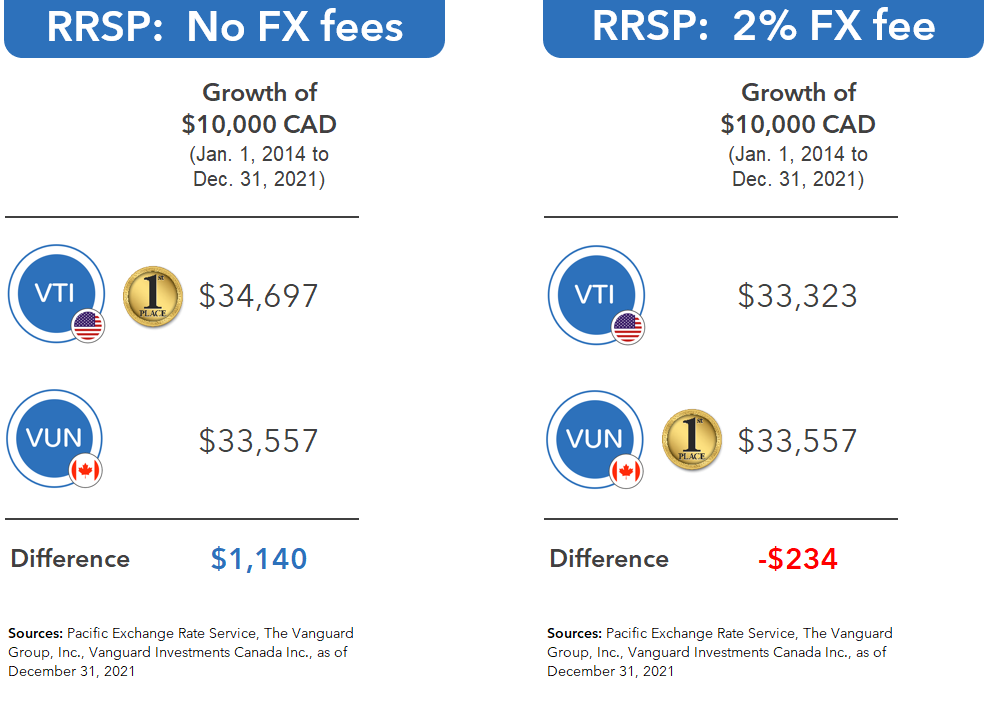 In a perfect world with no currency conversion fees, the lower product costs of VTI vs. VUN would have resulted in slightly more growth for VTI over our measurement period. However, if we assume a 2% currency conversion fee on the front-end purchase and back-end sale of VTI, we find VUN to be a much better option for these account types.

Last up, there’s our non-registered account comparison. Here, we’ll assume all units of each ETF are sold at the end of the measurement period, and the investor pays taxes at the top Ontario tax rate. If we first assume no currency conversion fees, we find VTI and VUN had similar after-tax growth over the measurement period. But once we tack on a 2% currency conversion fee to the purchase and sale of VTI, we find VUN to again be the superior choice for non-registered accounts.

In future videos, I’ll show you one way you can avoid your brokerage’s steep currency conversion fees, through a strategy called Norbert’s gambit. However, Norbert’s gambit is not without issues of its own. So for now, my advice would be to just stick with Canadian-listed ETFs and avoid U.S-listed ETFs altogether.