In my last post, we reviewed the recent underperformance of the Vanguard U.S. Aggregate Bond Index ETF (CAD-hedged) (VBU) vs. the Vanguard Total Bond Market ETF (BND). Although VBU’s additional product fees and foreign withholding taxes explained some of the difference, a good chunk of return was lost due to the fund’s currency-hedging strategy. This is not a knock against Vanguard, but rather the expected result of an efficient forward pricing mechanism. The negative returns from hedging the U.S. dollar over the past few years were mainly the result of the differences between Canadian and U.S. interest rates.

But what does the future have in store? What returns can a Canadian investor expect from currency-hedged global bond ETFs? To account for the expected returns from currency hedging, this post will show you how to adjust the yield to maturity (our best estimate of a bond’s future return) on two popular Vanguard foreign bond ETFs.

VBU holds the U.S.-listed Vanguard Total Bond Market ETF (BND), and then hedges the U.S. dollar exposure back to Canadian dollars, using forward contracts. These forward contracts usually mature in a month, at which time new contracts are entered into at the prevailing one-month forward rates.

BND had an average yield to maturity (YTM) of 2.49% as of June 28, 2019. But as we just learned, currency-hedged investors shouldn’t expect to earn just this return. The expected return for a Canadian investing in VBU will be a combination of BND’s YTM, plus (or minus) VBU’s return from its currency-hedging strategy. 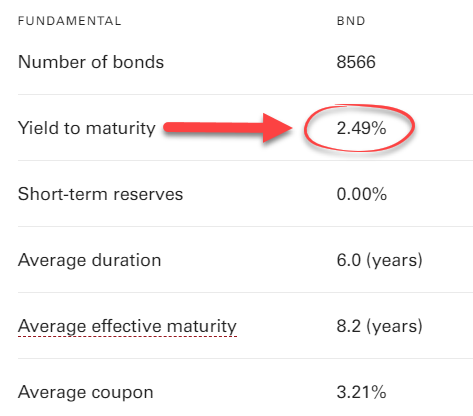 What if we compare VBU’s adjusted YTM to the YTM of a Canadian bond ETF like the Vanguard Canadian Aggregate Bond Index ETF (VAB)? We see VBU’s YTM is lower. This makes intuitive sense, as VBU has a lower average duration and average maturity than VAB. Since VBU has less term risk, we would expect it to also have a lower return.

Sources: Bloomberg, The Vanguard Group Inc., Vanguard Investments Canada Inc., as of June 28, 2019
*YTM has been adjusted for the expected return from currency hedging.

Most foreign investors would rather stuff their money under a mattress before investing in an international bond ETF, currently yielding only 0.68%. But as we learned above, the current YTM is only part of the expected return of a currency-hedged global bond. Investors also can expect a hedge return.

VBG’s adjusted YTM is a little trickier to calculate, as BNDX first hedges the underlying currencies back to U.S. dollars, and then VBG (which holds BNDX) hedges the U.S. dollars back to Canadian dollars. (Confusing, right?!)

We’ll start by calculating the first level of BNDX’s estimated hedge return. This is what a U.S. investor would expect to earn, in addition to the fund’s YTM.

BNDX is exposed to many underlying currencies: the euro, yen, pound sterling, Canadian dollar, and others. Vanguard then hedges these currency exposures back to U.S. dollars. In the chart below, I’ve calculated the hedge return for most of BNDX’s underlying currencies, and then weighted them accordingly. The result is an annualized expected hedge return of +2.33% for a BNDX U.S. investor. If we add this estimated hedge return to the fund’s YTM, we end up with an expected +3.01% adjusted YTM for U.S. investors.

Again, this makes intuitive sense. BNDX has a higher duration and higher average maturity than BND. So once we’ve adjusted BNDX’s YTM for its expected return from currency hedging, a U.S. investor should expect a higher yield from it.

Sources: Bloomberg, The Vanguard Group Inc., as of June 28, 2019
*YTM has been adjusted for the expected return from currency hedging.

Now that we’ve calculated the expected return for a BNDX U.S. investor, we just need to calculate the return from hedging the BNDX U.S. dollar exposure back to Canadian dollars (like VBG does). You’ll note that the process is identical to our first example, when VBU hedges BND’s U.S. dollar exposure back to Canadian dollars. As the calculations are the same, the annualized return from the Canadian hedging is also the same, at –0.87%.

If we add BNDX’s 0.68% YTM, plus the U.S.-perspective 2.33% hedge return, plus the Canadian-perspective –0.87% hedge return, we end up with a 2.14% expected return for VBG (before product fees and foreign withholding taxes). Once again, the estimate makes intuitive sense, as VBG has a similar average duration and average maturity as VAB.

Sources: Bloomberg, The Vanguard Group Inc., as of June 28, 2019
*YTM has been adjusted for the expected return from currency hedging.

Next: What About Expected Returns for Vanguard’s Asset Allocation ETFs?

Putting it all together, here are a Canadian investor’s expected fixed income returns for the bond ETFs within the Vanguard Asset Allocation ETFs:

Sources: Bloomberg, The Vanguard Group Inc., Vanguard Investment Canada Inc., as of June 28, 2019
*YTM has been adjusted for the expected return from currency hedging.

You’ve probably already noticed that expected returns for the global bond ETFs are similar to those for the Canadian bond ETF. As a rule of thumb, instead of going through all that effort, it’s probably reasonable to assume that currency-hedged foreign bond returns will likely be similar to Canadian bond returns going forward (before additional product fees and foreign withholding taxes).

In my next blog, we’ll estimate the expected long-term returns for each Vanguard Asset Allocation ETF as a whole – based on another excellent question from one of our faithful followers.