GICs vs. Bond ETFs: A Case Study and Bold Adventure

Star Trek may have introduced the expression, “to boldly go where no man has gone before,” but we’re the ones who actually get to do it in today’s post. To my knowledge, nobody has ever compared the before- and after-tax returns of Guaranteed Investment Certificate (GIC) ladders versus bond ETFs. At least I’ve not found an unbiased, historical comparison anyplace online.

Before we jump into the numbers, let’s take a look at some of the distinct advantages for each, since there’s no reason your portfolio can’t have both GICs and bond ETFs living in happy harmony.

By the way, if you’ve been following me for a while, you may have noticed that none of my model ETF portfolios contain GICs. For simplicity, I’ve only included bond ETFs, mainly because it’s easy to use historical bond index returns to simulate the long-term back-tested performance data. But that doesn’t mean I have anything against GICs. We often include them in our PWL client portfolios.

Shorter maturities. A typical 1–5 year GIC ladder (with an equal investment in each of the ladder’s “rungs” or years) has an average maturity of 3 years [(1 + 2 + 3 + 4 + 5) ÷ 5 = 3 years]. In comparison, the iShares Core Canadian Short Term Bond Index ETF (XSB) has a similar average maturity of just under 3 years – so, there’s comparable term risk.

However, a broad-market bond ETF, like the iShares Core Canadian Universe Bond Index ETF (XBB), has an average maturity of over 10 years. This makes it more vulnerable to interest rate increases than either a short-term bond ETF or a GIC ladder.

No gut-wrenching price drops. Investors hate seeing their “safer” bond ETFs in the red, but “them’s the breaks.” Whether the losses show up due to the premium bond issue discussed below, or increasing interest rates, it’s enough to send conservative investors running for the hills … or worse, into high-dividend-paying stocks.

GICs largely avoid these behavioural issues. Their daily values tick up (never down) due to the money the GIC issuer owes them in the form of accrued interest. If GICs traded on a stock exchange or in a similar secondary market, their daily values would also rise and fall, similar to bond ETFs. Since they don’t, this is really one of those “ignorance is bliss” situations.

No fear of bankruptcy. The Canada Deposit Insurance Corporation (CDIC) covers GICs and other eligible savings up to a maximum of $100,000 in principal and interest – per depositor, per insured category. As long as you stay within these limits, it’s highly unlikely your GIC investment will ever go belly up.

The same cannot be said for some of the bonds in an ETF. Roughly 70% of the underlying bonds in a plain-vanilla Canadian bond ETF like XBB are government-issued, which are unlikely to default. But XBB still invests in about 30% investment grade corporate bonds. While these higher-quality corporate bonds are less likely to default than lower-quality “junk bonds”, the risk is still more than zero.

More tax efficient. Currently, most bond ETFs are chock-full of premium bonds. As the name suggests, you end up paying more to purchase underlying premium bonds than you receive when they mature. This results in a capital loss at maturity. To compensate you for this loss, the bonds pay you extra coupon interest. The catch is, in a taxable account, the interest is taxable at your marginal tax rate, which can result in a higher annual tax bill.

GICs don’t have this premium bond issue. When your GIC matures, you receive your original investment back, plus interest along the way.

Simpler. It’s easier to purchase one bond ETF instead of managing a multi-GIC ladder. This is especially true if you need to take extra care across many accounts to avoid exceeding the CDIC limits. (That said, you do lose CDIC protection if you invest in a bond ETF instead of GICs)

As a bond ETF investor, you also can set up dividend reinvestment plans (DRIPs) in your funds, to automatically purchase additional ETF shares over time.

More liquid. You can essentially sell bond ETF shares any time, for any purpose, with no repercussions. GICs are typically locked in until their maturity date. You can mitigate this liquidity risk by investing a portion of your portfolio in bond ETFs, for addressing emergency spending needs or to rebalance your portfolio during a stock market meltdown. For more information, see The Most Boring Battle Ever: Bond ETFs or GICs?

Benchmarking fit. Even if a GIC ladder and a bond ETF have comparable long-term expected returns, you’ll likely benchmark, or compare, your yearly fixed income returns to a bond index. A bond ETF’s annual returns will likely closely match its closest bond index annual returns. But a GIC’s return can be substantially better or worse than its closest benchmark from one year to the next – especially during periods of rising (falling) interest rates. If you prefer to closely track a bond index with no surprises along the way, GICs may not be for you.

Higher yields (based on more term risk). This requires a bit more explanation. The best return estimate for a bond or GIC is its yield-to-maturity (YTM). Generally, a ladder of GICs will have a higher YTM than a short-term bond ETF. So usually, a GIC ladder is expected to outperform a short-term bond ETF like XSB.

The YTM on a broad-market bond ETF like XBB can skew higher or lower than a GIC ladder. If you invest in a GIC ladder with a lower YTM than a broad-market bond ETF, you should expect a lower return on your investment … and vice-versa. But keep in mind, when a bond ETF has a higher average maturity than a GIC ladder, you can assume it carries more term risk. In other words, the higher expected return is not a free lunch; it’s compensation for taking more term risk.

For comparison, I’ve included the year-end YTM for XSB, XBB and a GIC ladder, which were available for purchase from National Bank Independent Network (NBIN) over the past seven years. As expected, the GIC ladder had a higher YTM than XSB on each measurement date. XBB generally had higher yields than the GIC ladder, but their rates were fairly comparable in most cases.

Are We Ready To Boldly Go?

Now that we’ve fueled up our jets with the preliminaries, let’s launch, warp speed ahead, into that cutting-edge comparison I promised – in two parts:

So, here are the essentials from our first comparison, starting with $100,000 in each investment and measuring performance from 2012–2018:

Master of the Bond Universe: XBB vs. GIC Ladder

A GIC ladder arguably behaves more like a short-term bond ETF than a broad-market bond ETF; both GIC ladders and short-term bond ETFs invest in fixed income securities that mature in 1–5 years. A broad-market bond ETF like XBB invests in short-, mid- and long-term bonds, some of which don’t mature for 20+ years. The average maturity of XBB’s bond holdings is around 10 years, while a GIC ladder has an average maturity of just 3 years. 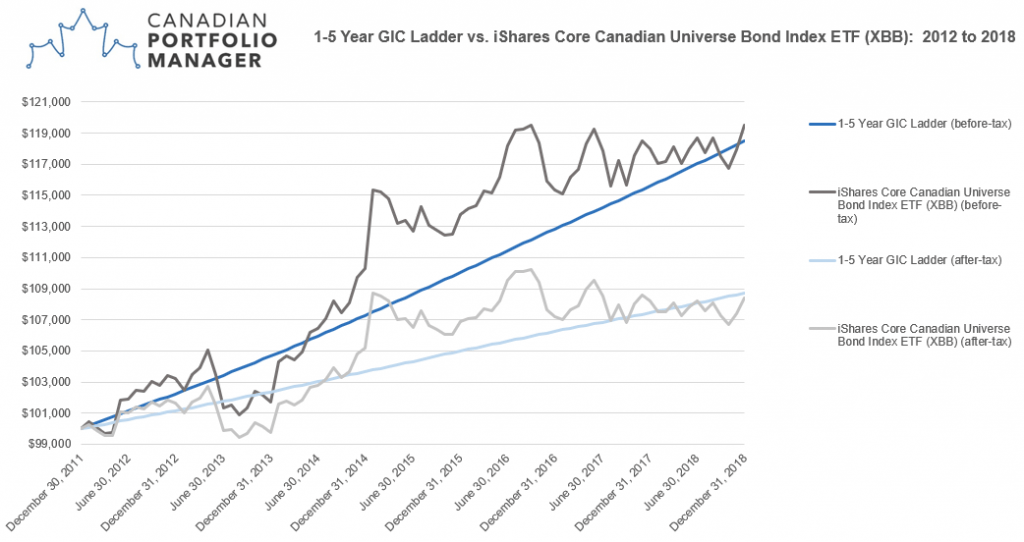 So, there you have it – our groundbreaking comparisons are now complete, which leads to …

Key Takeaway #3. When the YTM of a GIC ladder is similar to or higher than the YTM of a bond ETF, it can be a decent alternative for a short-term or a broad-market bond ETF.

This begs the question: What are those YTMs looking like these days? Ask, and you shall receive:

As of June 10, 2019, a GIC ladder was yielding more than either a short-term or broad-market bond ETF. If you’ve made it this far, you probably don’t have to be Mr. Spock to conclude: While these conditions persist, it would be reasonable for an investor to decide to swap out some bond ETFs for GICs – especially if they did not require the liquidity, and preferred less ongoing fluctuation in their fixed income investments.

Wow. I thought this was a stellar topic, but it could also leave your head spinning. Please feel free to include any questions in the comments section below.