In our last blog/video, we reviewed how to invest in the broad Canadian stock market using either of the Canadian equity ETFs included in iShares’ or Vanguard’s Asset Allocation ETFs. Both offer a low-cost, well-established, and well-built way to invest in Canada’s stock market with minimal fuss. However, if you want to reduce the risks of holding all your investment eggs in one highly concentrated Canadian basket, you’ll also want to look beyond our borders.

In today’s blog/video, we’ll check out Vanguard’s and iShares’ U.S. equity ETFs found in their asset allocation products. Specifically, these include:

You may have noticed a small Canadian or U.S. flag decorating each ETF symbol in the images below. These indicate whether the fund trades on the Canadian or U.S. stock exchanges. This distinction will become more important in future blogs/videos.

Once again, all four ETFs are on solid ground in terms of offering reasonable fund management costs, decent staying power, and a disciplined strategy for capturing U.S. stock market returns.

For one, they have all been around for a while.

The U.S.-listed ETFs were launched in the early 2000s, while the Canadian-listed ones launched in 2013 and 2015. Due to their more recent launch dates (and the fact that Canada has fewer investors than the U.S.), VUN and XUU haven’t accumulated as many assets as their VTI and ITOT U.S.-listed counterparts. However, with billions of dollars in assets under management, they’re still respectable by Canadian standards.

In terms of management costs, the expense ratios or MERs for each of these ETFs are also extremely low, with the U.S.-listed ETFs priced slightly lower than their Canadian-listed counterparts.

Either of these indexes offers effective exposure to, and diversification across the total U.S. market, with both tracking the performance of thousands of U.S. companies.

Better still, there is considerably less concentration in each ETF’s top holdings … at least relative to the Canadian equity ETFs reviewed in our last blog/video. You may also notice the percentage allocations for each company in our four ETFs are nearly identical across the board. 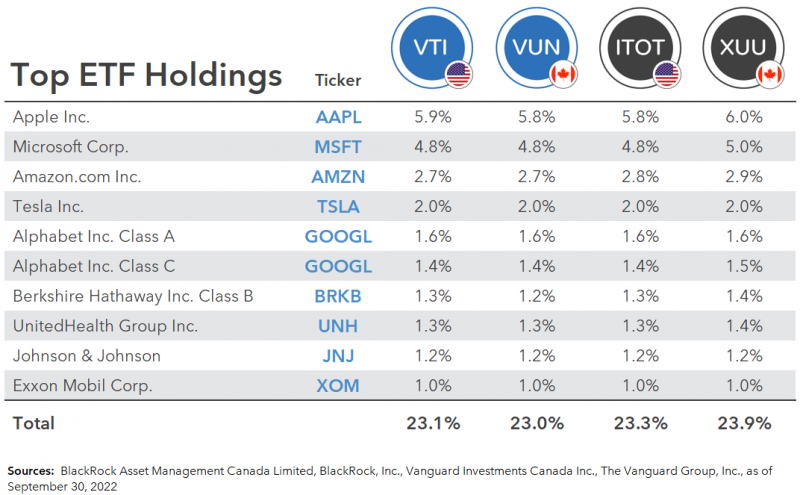 Because these ETFs’ underlying indexes are composed so similarly, we would expect their performance to be similar as well. Sure enough, since January 1st, 2005, the CRSP U.S. Total Market Index and the S&P Total Market Index have had similar annualized gross returns in Canadian dollar terms. All else equal, this would suggest we can expect highly synchronized gross returns going forward for ETFs tracking either index. 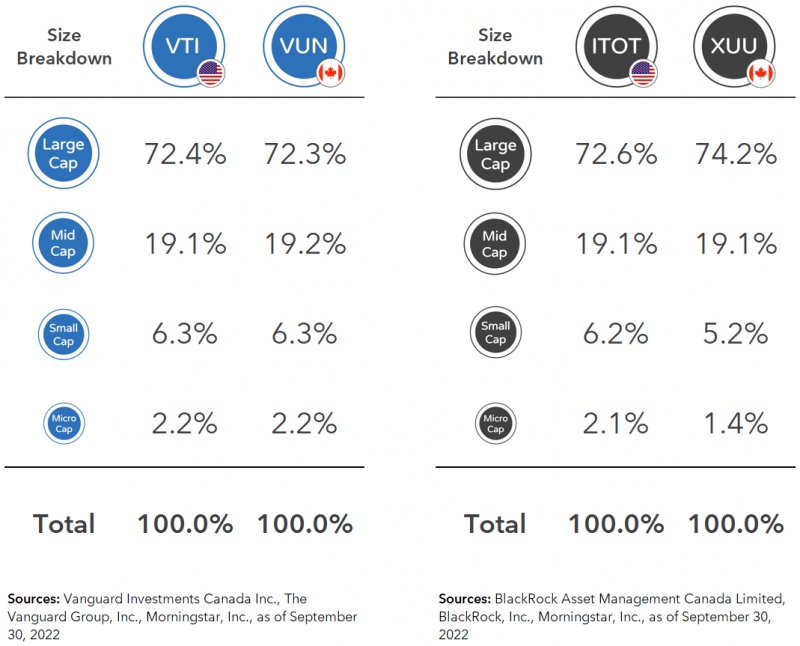 Both indexes tracked by our four ETFs are also market cap weighted, which results in large- and mid-size companies wielding the most weight in each fund. As we learned in our last blog/video, that’s why these larger companies drive most of the ETF’s performance. The smaller companies’ performances become buried under the weight of the biggest players.

We now arrive at one of the most important reasons to spread your investments generously across Canada and the U.S.: Relative to the Canadian stock market, the U.S. stock market is considerably less concentrated in the financials, energy, and materials sectors. This makes it an ideal, if not essential sector-diversified complement to an all-Canadian equity portfolio.

Next up, it’s important to note that our four ETFs do not gain their exposure to the U.S. stock market in exactly the same way.

In an attempt to closely track their respective indexes, VTI and ITOT both hold a sample of actual U.S. stocks, while VUN and XUU mostly hold existing U.S.-listed U.S. equity ETFs for their exposure.

As VUN and VTI both track the same index—and VTI already existed when VUN was launched—this strategy makes good sense. And since VUN only invests in VTI, we would expect their net returns to closely mirror each other.

In comparison, iShares’ XUU fund structure is more questionable. Instead of just holding ITOT, which is XUU’s U.S.-listed counterpart, XUU’s managers decided to hold an assortment of U.S. equity ETFs, plus a selection of individual U.S. stocks. 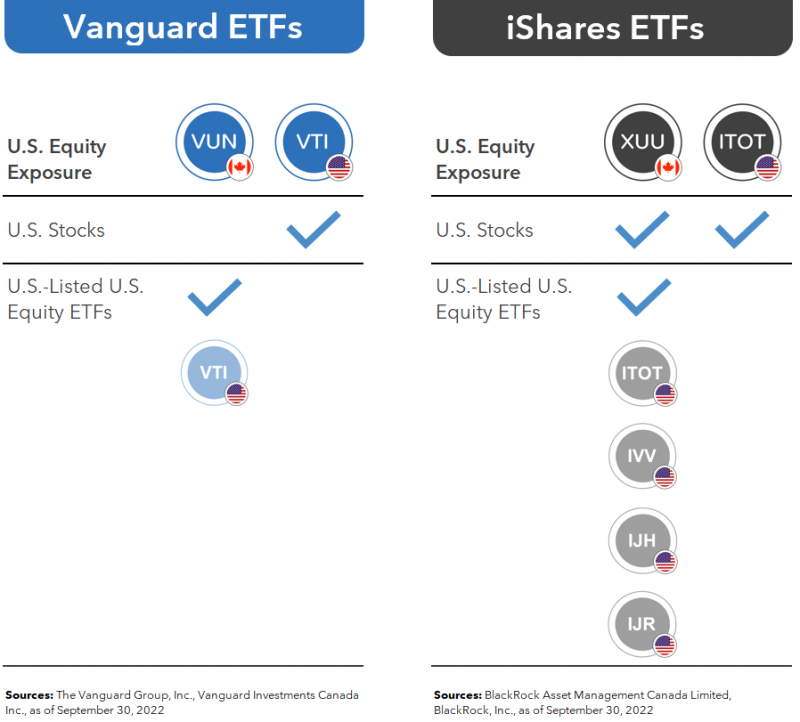 In terms of risk, all four have experienced losses of around 30-50% at some point. For example, during the Global Financial Crisis, both VTI and ITOT lost nearly half of their value in Canadian dollar terms. And during the COVID-19 pandemic, all four ETFs lost just under 30% of their value.

Moving forward, you’d best expect more of the same now and then, because that’s just how markets work.

Over longer periods of time, stock markets deliver overall positive returns from a global collection of capital enterprises that never sleep. However, to earn those worldwide market returns, it stands to reason, you must be widely invested in markets around the world. Downturns are scary and unnerving whenever and wherever they happen. But counterintuitively, they are the kindling that sparks future market growth, and future higher investment returns … IF you stay invested.

In our next blog/video, we’ll show you how foreign withholding taxes can take a chunk out of your ETF’s dividends. See you soon!